If you want to improve your mathematical skills and challenge your brain, these 100+ math riddles are for you. From basic arithmetic to advanced algebra, these math puzzles and math equations will test your problem solving abilities and help you hone your math skills. These riddles are a fun and engaging way to improve your math skills. Check your answers against the provided solutions or try to solve them all on your own. Either way, you'll be sure to have a good time while you're at it. 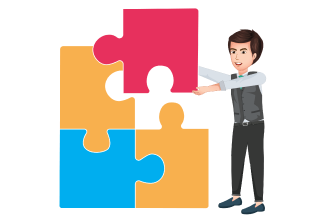 A 300 ft. train is travelling 300 ft. per minute must travel through a 300 ft. long tunnel. How long will it take the train to travel through the tunnel?

I am a three digit number. My second digit is four times bigger than the third digit. My first digit is three less than my second digit. Who am I?

There are 100 pairs of dogs in a zoo; a pair of babies are born for each dog. Unfortunately, 23 of the dogs gone . How many dogs are left in total?

Can you arrange four nines to make it equal to 100?

When Miguel was 6 years old, his little sister, Leila, was half his age. If Miguel is 40 years old today, how old is Leila?

What's the maximum number of times you can subtract five from 25?

Guess the price of shoes and hoodie -Math riddle

The total cost of a pair of shoes and a hoodie is $150. The hoodie cost $100 more than the pair of shoes. How much does each item cost?

How can you add eight fours together so the total adds up to 500?

If four men can build four tables in four hours, how many tables can eight men build in eight hours?

Three brothers live in a farm. They agreed to buy new seeds: Adam and Ben would go and Charlie stayed to protect fields. Ben bought 75 sacks of wheat in the market whereas Adam bought 45 sacks.

At home they split the sacks equally. Charlie had paid 1400 dollars for the wheat. How much dollars did Ben and Adam get of the sum considering equal split of the sacks?

Which one will replace the question mark ?

A grandfather, two fathers, and two sons went to the movie theater together, and everyone bought one movie ticket each. How many tickets did they buy in total?

How Many Ducks ? -Math riddle